The 24 Solar Terms is a parent-child board game with the theme of traditional Chinese culture, which is suitable for people over 6 years old.
The game lasts about 30min and is suitable for 2-4 people.
Now I will introduce the detailed gameplay of this board game. 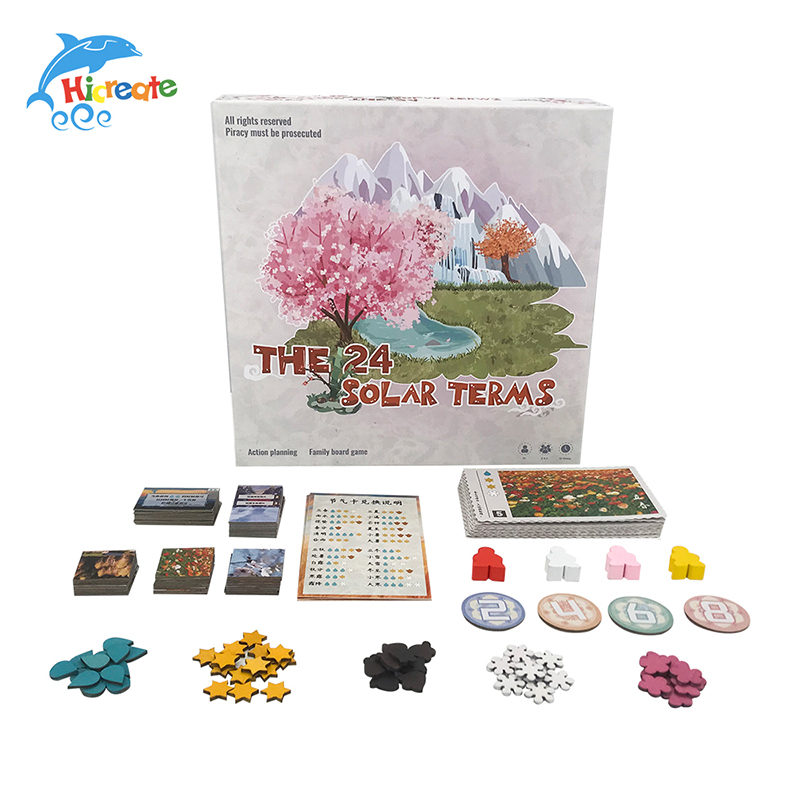 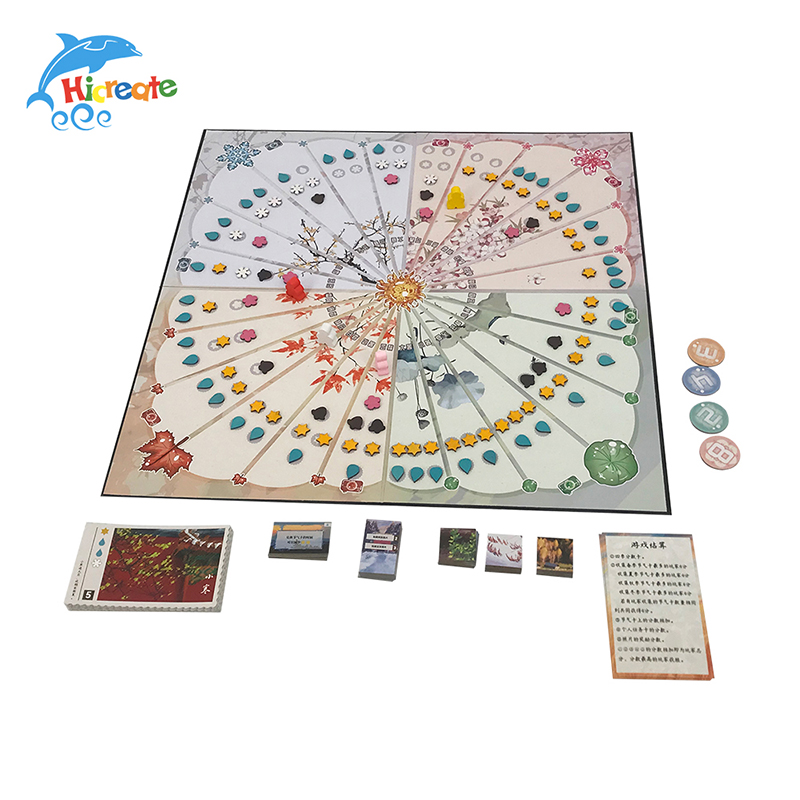 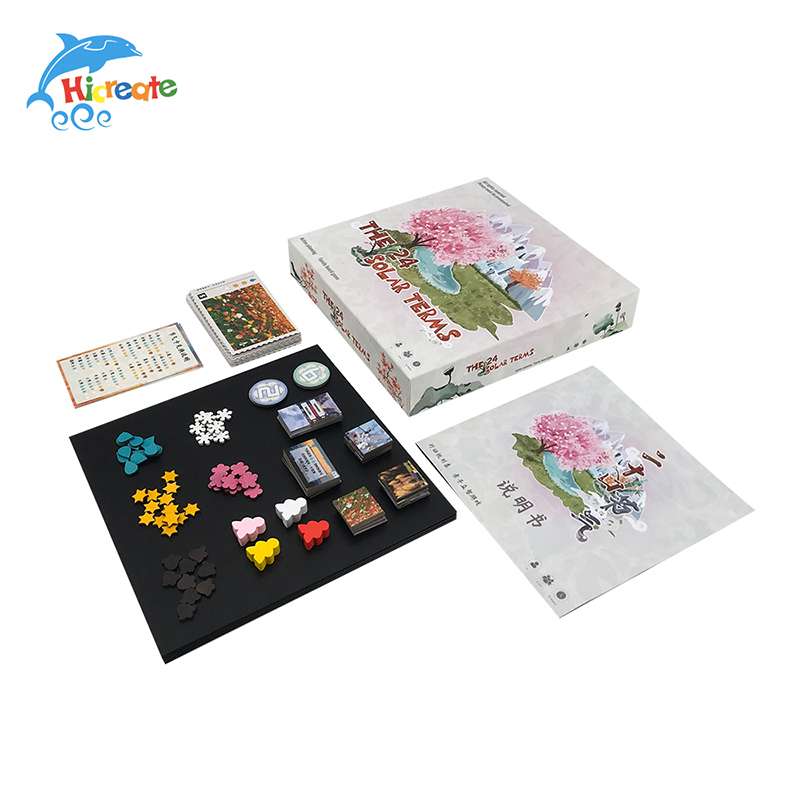 First of all, based on the icon prompts on the board, we need to place the corresponding wooden resource parts on the chessboard.
Then, each player selects a meeple of one color as their own player marker and places it in the preparation area in the center of the chessboard.
Next, each player needs to draw a task card as the goal of their respective task in this game. On each task card, there are two tasks, and players who complete the tasks can get the above task score at the time of checkout.
Next, we need to randomly open two skill equipment cards. Players who have completed the four seasons can purchase one card at a time. The icon on the equipment card is the resource you need to pay for the equipment.
Finally, we need to put aside the public Four Seasons Task Card in a high-to-low score.

The game starts, player who has first seen the calendar recently is the initial player.
Next, it is up to the initial player to decide which block to place their indicator in.
Each time the player reaches a block, they can choose to take a resource on top of this block.
There are three gears of resources, the first is water droplets and sunlight, the second is snowflakes and fruits, and the third is universal petals.
The order of take is based on the gear. When the resources of the first gear are taken away, the second gear can be taken, and so on.
For example, if I am in this block, there are both water droplets and sunlight of the first gear, then, I can only choose to take either all the water droplets in this block, or all the sunlight.
If there is no more water droplets or sunlight in this block, I can take the fruit or the snowflakes.
If there are neither water droplets or sunlight in this block, nor any snowflakes or fruits, then I can take the universal petals remained. The universal petals can replace any kind of resource.
If there are no resources left on this block, then when you come to this block, you are unable to get anything.
After the intitatial player moves, the next players can decide which block they go to in clockwise order.
It should be noted here that for one block, only one player can stay on.
For example, if a player stops at this block, then I am unable to choose to go to this block.
Next, after all players have moved for one round, the following sequence of actions needs to follow the rule:
Each time, the last player on the chessboard moves first.
For example, now that I'm at the end and everyone is ahead of me, then I can move first.
After I move, now, the last player is this player, so this time it is this player who moves first.
In the game, situation like this also occurs:
Some players, who don't like to move from by block and want to cross a season to get some kind of resource. Then he is many blocks ahead of other players.
Then, next, he will have to wait until the players behind him to catch up and surpass him before he can start the next action.
This kind of operation will have a certain instant benefit, but it will also miss many rounds of resource collection, and everyone needs to make a careful choice based on the actual situation in their game.
When moving on the chessboard, players can redeem resources for the solar term cards. There is only one card for each solar term, and only one can be redeemed for each action, first come and first served.
However, it needs to be noted that the player can only redeem the solar terms of the season which they are currently staying in.
For example, I have gathered resources and want to redeem the Spring Equinox, but I am now in the season of summer, therefore, I can't redeem it, and I can only buy it when I reach the season of spring.
Players who have completed the four seasons can get a share of the resource reward from the four resources of the sunlight, water droplets, fruits, and snowflakes.
The player who arrives first can choose first, and the player who arrives later needs to choose from the remaining resources.
If you're the last to arrive, you'll only have to take the resources left. Therefore, the player who completes the lap first will have a great advantage.
Meanwhile, when the player has completed the four seasons, they can start to purchase the equipments.
Players can choose one of the opened equipment to buy, after buying one, the equipment area can open the next one for display, so that the next player can choose to buy.
Equipment cards are disposable items that need to be placed in the fold area when used up.
On the chessboard, there is also a special kind of plot, which is the photo plot, the plot with this kind of camera logo.
When the player arrives at the photo plot, they can choose not to take the resource, but use a resource to take a photo, so to obtain the photo and the score on it directly.
So when players feel they don't want the resources, be sure to grab these plots that can be photographed and get extra points first!
In the game, the Four Seasons Task Card is also set, in another word, when the players collect one of the solar term cards in all four seasons, they are able to get the scores of the Four Seasons Task Card, the score is set from the highest to lowest. For example, the player who gathers the first four seasons can score 8 points, the second 6 points, the third place 4 points, and the fourth place 2 points.
Meanwhile, the player who collects the most solar term cards in a single season in the game can also receive additional rewards.
For example, if I redeem more solar term cards in the season of spring than any other player, I get 4 scores for reward, and when I get the same most numbers of solar term cards with another player, we can both get 4 scores.

So how to end the game?
It needs to decided based on the number of players.
When 2to 3 people play the game, when the solar term cards are all redeemed, the game ends.
When the game is played by 4 players, the game ends when the four seasons task cards are taken.
When the game ends, it enters the settlement stage.
The game adopts the score gathering mechanism.
Player's final score = The season card score earned by the player + The score of individual completed task cards + The score of four seasons task cards + The reward score with the most solar term cards in a single season + The score of the photo
The player with the highest score wins the final victory.